The change in energy storage and propulsion system is driving a revolution in the automotive industry to develop new energy vehicles with more electrified powertrain systems.

Lithium-ion (Li-ion) batteries have emerged as the most promising energy storage technology in recent years due to their higher energy density, lighter weight, no memory effect, and lower self-discharge rate when compared to other rechargeable batteries types.

The continual commercialization of EVs in the global market by brands such as Tesla Model S, Nissan Leaf EV, BMW i3, Hyundai Kona Electric as well as Indian market with many big names entering the EV domain such as TATA with NEXON EV, the old school Mahindra REVA along with 2-wheeler domain with ATHER, OLA Electric, SIMPLE, Hero, etc., has further promoted the rapid development of Li-ion battery technology and raised a wide public expectation of its future.

Importance of Thermal Management for EVs?

Currently, most research into Li-ion batteries focuses on the material aspect to improve the specific energy, power, and cycle life, with relatively less attention paid to thermal-related issues.

Even the brands are using the terminologies such as range, rapid charging which usually grabs the attention of customers. The end consumer is slowly getting convinced with the range capability for 2 wheeler, but still there exists range anxiety when looking at BEV in 4 wheeler domain.

The fear of accident hinders the full acceptance of EVs from the market, therefore many countries require the lithium-ion battery to pass compulsory test standards, e.g., UN 38.3, UN R100, SAE-J2464, IEC-62133, GB/T 31485, etc., before its application in EV.

Abuse Conditions in Accidents and Internal Short-Circuits in Electric Vehicles

There can be two possibilities when considering accidents due to Thermal Runway (TR); one is a self-induced failure and the other is an abuse condition in practical use.

In the view of probability, the self-induced failure of the lithium-ion battery exists but at a very low level. The abuse conditions can be categorized as shown.

The Internal Short Circuit (ISC) is the most common feature of the Thermal Runway (TR). Almost all the abuse conditions are accompanied by ISC.

Following the failure mechanism of the separator, the ISC can be divided into three categories considering the above-mentioned abuse conditions.

The hazard level of the ISC can be evaluated by the self-discharge rate and the exotic heat generation. It can be said that there are three levels of ISC as shown in the table.

To enhance the thermal performance of Li-ion batteries, reducing the amount of heat generated from the battery and boosting the heat dissipation rate are two feasible options:

TMS is generally used for batteries operating under a high discharge rate, and especially for a large-scale battery pack that requires a long life cycle (>10 years) and is pricy to replace.

For example, all HEVs, PHEVs, and EVs are necessary to be equipped with Thermal Management Systems (TMS) due to the expensive battery repair, high cost of vehicles per SE, and relatively low automotive replacement rate.

In recent years, several techniques for readily removing heat from a battery pack have been tried and tested by various research groups across the globe. They can be classified in various ways, as seen. The factors that are traditionally considered in the TMS trade-off analysis include energy efficiency, capital costs, ease of operation, maintenance requirements, and reliability. Cold plate and thermoelectric devices are not recommended for use in commercial systems, owing to their high thermal resistance and low coefficient of performance, respectively.

However, Gentherm Incorporation employs thermoelectric devices in their commercial design, whereas cold plates are used in the GMC Volt and Tesla Model S battery packs, signifying that both technologies have improved significantly in recent times.

Conventional Thermal Management systems like fans and cold plates either have low scalability or deliver marginal performance (estimated from combined sets of cooling levels and regeneration rates) under challenging conditions. Other interesting alternatives (such as Thermoacoustic, Magnetic, etc. are available but they have not yet attained full technological maturity.

It is, therefore, concluded that a robust modular Thermal Management system (TMS) would be a hybrid system, designed through the union of at least two different TMSs. Considering factors such as technical risks, ease of integration, cost, and energy efficiency, it can be inferred that PCMs would form an integral part of the modular TMS assembly. 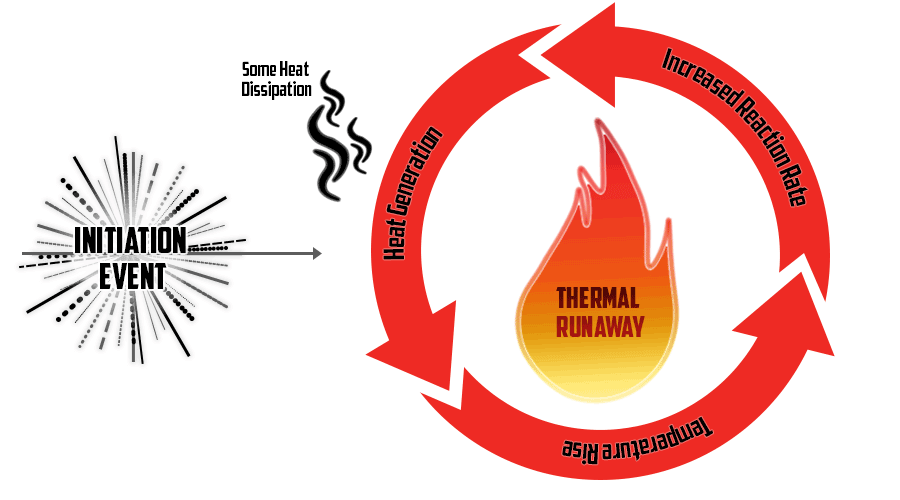 Thermal runaway begins when the heat generated within a battery exceeds the amount of heat that is dissipated to its surroundings.

What causes the battery to overheat which leads to thermal runaway?