Following are the Top 4 Lithium-ion Batteries Manufacturers in India

The li-ion battery has established itself as the technology of reference in the future world of electric cars. A lithium-ion battery is a rechargeable battery used in electric vehicles as well as portable electronics. Lithium-ion batteries are the clear winner, with very little risk for their businesses to be threatened by alternatives such as other advanced batteries or supercapacitors.

The largest market for lithium-ion batteries will remain electric vehicles, from 2020-2030.

The most common type of battery used in EVs is the lithium-ion battery. These batteries are also used in portable electronics, even in cell phones and computers. Li-ion batteries have high energy efficiency, a high power-to-weight ratio, and good high-temperature performance. This means, batteries hold a lot of energy for their lesser weight, which is required for electric cars.

The lesser the weight, the longer the car can travel on a single charge (By Newton’s First Law of Motion). Lithium-ion batteries have a low self-discharge rate, meaning they are better than most other batteries at holding a full charge over time.

Li-ion batteries consist of primarily four main components: Cathode, Anode, Electrolyte, and Separator. Every element of a Li-ion battery is essential as it cannot function when one of the components is missing. 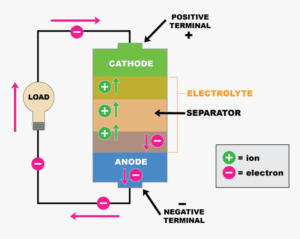 How Does the Lithium-Ion Battery Work in an Electric Car?

EVs are powered by rechargeable batteries. This battery type provides a reversible chemical reaction, allowing both their discharge and charging process. During the battery discharging process, the electrical current flows from cathode (+) to anode (-), while the reverse process occurs during charging(Source).

Read Here: – How Does a Lithium-ion Battery Work?

The fundamental principle behind the working of a lithium-ion battery is to circulate electrons by creating a potential difference. Each cell of a li-ion battery contains two electrodes immersed in a conductive liquid called the electrolyte.

Read More: How EVs Are the Best Solution Towards Climate Change

They have higher energy density and cost less. They are essentially a group of rigid electricity-generating compartments, consisting of three pieces: a positive electrode, a negative electrode, and an electrolyte (liquid chemical compound between them).

Unlike more traditional ones, most lithium-ion batteries also include an electronic controller, which regulates power and discharge flow, so your battery doesn’t overheat or explode.

They are lightweight and have improved safety. However, their cost is high as compared to lithium-ion. Also, the energy density of Li-Po batteries compared to Li-Ion Batteries is relatively less. In Li-Po batteries, the electrolyte used isn’t a liquid.

Instead, Li-Po batteries use one of these three forms: a dry solid, (it was phased out during the prototype years of lithium polymer batteries) a porous chemical compound, or a gel-like electrolyte.

The battery system is a significant and important part of an Electric vehicle. The different varieties of Li-Ion batteries are currently the most dominant battery types used in EVs. Because of increasing demand, there is a requirement for better performance of batteries in terms of reduced weight, better cycling ability, recyclable materials, general battery performance, and better driving range.

“Next-Gen Batteries to Power Up Electric Vehicle Installed Base to 100 Million by 2028.” The next generation of electric vehicle batteries will be solid-state batteries, where the liquid electrolyte is replaced with a solid and conductive material.

This will provide a high specific energy rate that will provide an improvement over today’s Li-ion batteries. BMW and Solid Power have joint ventured to develop a new solid-state battery for EVs. Nexeon, a UK-based company, is researching new materials based on silicon to replace carbon in the anode, which will double the range of EVs.