Electric vehicles are the way of the sustainable future, and electric bikes will be the most popular mode of transportation, reducing vehicular pollution over time.


The cost of charging an electric bike equals 15% of the total cost of the fuel. In this way, it will surely assist us in lowering our transportation expenditures.

Electric bicycle companies provide a significant contribution to India’s long-term growth, as they provide a smooth and ecologically beneficial mode of transportation.

What is Electric Bicycle? Why Choose as a Best mode of Transport

E-cycles or E-bikes are the terms used to describe electric bicycles. E-Cycles are propelled by a motor. Typically, the motor engine is mounted in the front or back wheel. The greatest e-bikes are those that include a mid-drive motor that is integrated with the gear and crank.

Electric Motor simplifies the experience of cycling. If you love nature and enjoy cycling, then e-bikes are undoubtedly the most sustainable means of transportation.

It is also incredibly convenient to transport a large number of loads on your bicycle. When it comes to mountain climbing, electric bicycles are usually one of the best modes of transportation. Several Indian Electric Vehicle (EV) manufacturers have recognized the demand for electric bicycles and have developed new e-bikes.

An Overview of the Indian Electric Bike Market 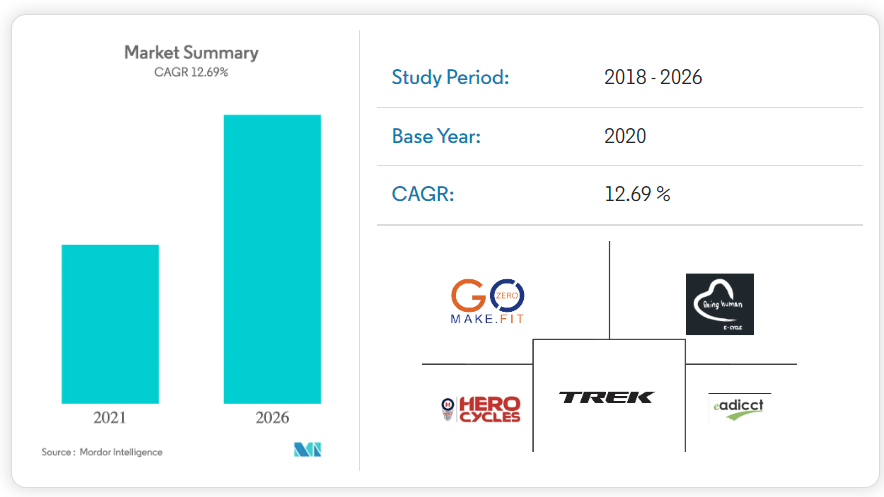 Recent COVID-19 has resulted in reduced sales of e-bikes in India. In 2020, the market generated a revenue of USD 1.02 million, as compared to USD 1.70 million in 2019. These reduced sales were the result of lockdowns and economic slowdown in India.

The Company was Established- 19 January 1984

The Hero brand prides itself on producing “India’s most popular e-bikes.” The series introduced Hero LECTRO EHX20, who had the catchphrase “riding anywhere.” The centre motor powers this pedal-assist E-Cycle. Hero LECTRO EHX20 has a sleek design and costs 135,000 INR. It has a Yamaha 10.9 Ahx36V battery and a range of 60-80 km on a single charge.

Electric Bike Elite is one of the Best electric bicycles from the geekay bikes’ extensive selection. It has a high capacity 270wh battery with a capacity of 7.5 ah that will provide 50km of effort-free riding for a price of 47,999 INR.

And if you enjoy collecting mechanical items, this bicycle is ideal for you because it is made up of 85% montage. It is guaranteed to come in a single package with all of the necessary tools for successful assembly. It also doesn’t require complicated steps, as assembly takes only 15 minutes.

Geekay Bikes has been in business since 1961, producing traditional bicycles and parts, electric bicycles, electric pedal rickshaws and parts, and batteries. They guarantee that they will supply the best cycles on the market.

The range of prices is Rs.35000 to Rs.48000. Geekay Bikes’ ECO BIKE PRO PLUS is without a doubt one of their most unique products. It offers a USB charging option with a strong motor and a high-capacity removable battery. The market price of the ECO BIKE PRO PLUS is Rs. 43,849.

E-Ashva Trio’s would be one of the top e-bikes in India if you consider the inexpensive pricing and effective range. E-Ashva has a range of 80 kilometres per charge thanks to its 7.8 ah lithium-ion batteries. It is about 25 kg in weight. It comes for 33,779 INR which is a fair price of less than 40,000 INR.

Ashva Electric Bicycle can travel 80 kilometres on a single charge. The cost is Rs. 37,799 (about). Ashva has a sophisticated Li-ion battery with a capacity of 18 ah, providing an extra-long range.

E-TRIO was one of the Best electric vehicle conversion firms in India, as well as the first to have approved E-LCVs on the road. E-mission TRIO’s is to give everyone access to the most comprehensive selection of electric vehicles (EVs) at an affordable price. It is based on a three-way change concept: decarbonizing the environment, affecting businesses, and changing people’s lives.

NIBE Motors designs their e-bikes in several categories, such as Gents, Ladies, Postman, Police, Indian Army, and Lipo, as opposed to the conventional generalised sleek forms of e-bikes. These Li-ion-based e-bicycles range in price from 36,666 to 38,499 INR each charge, depending on the type.

Swagtron EB-6 T Bandit Electric Bike 7 by Swagtron is the ultimate adventure-proof e-bike for adventurous riders, priced at 73,490 INR. With a 350-watt electric motor capable of reaching speeds of up to 30 kilometres per hour. It’s a fat-tiered bike with a maximum load capacity of 120 kg that provides smooth riding. The Indian E-Bicycles syndicate was valued at USD 1.02 million in 2020, and it is expected to grow to USD 2.08 million by 2026, representing a 12.69 per cent CAGR during the forecast period.

Everything about SWAGTRON revolves around movement. Hoverboards, skateboards, scooters, and E-bikes are among their products.

The fact that scooters and electric motorcycles are frequently referred to as e-bikes in India demonstrates that the e-biking business in the country is still in its infancy (though, to be fair, it’s difficult to surpass the popularity of scooters in the country).

Some of the country’s most well-known e-bike manufacturers include Hero Lectro, Tronx, and Autonix. Even now, the country boasts a plethora of promising e-bike firms producing world-class models that are perfectly suited to the country’s numerous scenic cycling routes.

Soon, e-bikers will be a common sight on the winding Manali-Leh route or the scenic Chennai-Pondicherry route. And you’ll discover that the brand has a lot to offer in terms of diversity and design.

This should come as no surprise given that it is a subsidiary of India’s “biggest two-wheeler company,” Hero Cycles, based in Europe. Although the organisation has been established for a long time, Lectro, its dedicated e-bike brand, only debuted in 2016.

One of the key motivations for the company’s formation was to promote the country’s EPAC industry’s expansion. This should give you a good idea of how e-biking is doing in India. As previously stated, it is still early, yet it is already exhibiting signs of strong growth. And Hero Lectro is right in the midst of it, as indicated by the catalogue’s already considerable size and scope.

In the end, several new businesses, as well as established industry giants, will go deeper into the Electric Bicycle Manufacturing market. This could lead to a more environmentally friendly transportation system in the future.