Norway has the highest market penetration per capita in the world and also has The world’s largest market share of new car sales, 74.7% by 2020.

According to the World Economic Forum-

75% of new sales were plug-ins. Norway provides tax incentives to electric vehicle owners. 54% of total sales are fully powered by a battery To make Norway the first country where all electrics sell petrol, diesel, and hybrid cars are combined.

Plug-ins make up 45% of the Icelandic market. A climate-conscious nation already has 99% renewable energy. Its small size makes the discharge of electricity less of a problem.

Read More: How EVs Are the Best Solution Towards Climate Change

Iceland is the smallest country with a population of 3.57 lakhs (2019. But it is faster than any other country in terms of continuous use of More Electric Vehicles. (PHEV) and electric battery vehicles (BEVs) – registration of new passenger cars in Iceland from January 2014 to June 2018.

Sweden comes third in the list of the ” World’s largest Electric Car Exporting Countries” Electric cars have collected a third of the new sales. The number of electric vehicles in Sweden has increased significantly over the past decade While 157 electric vehicles were registered in 2009.

As you can see in the graph below- 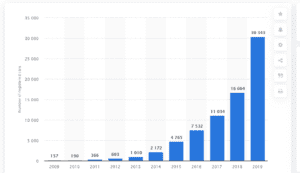 A number of electric passenger vehicles registered in Sweden 2009-2019:

The Netherlands is the third-largest exporter of electric vehicles –

Finland is a major contributor to the global economy, and international trade is the third-largest in GDP. The European Union makes up 60 percent of total trade. 18% of all new cars in Finland were ‘Plug-in’ That means hybrid or whole electricity. Sweden comes on 5th position in the list of the ” World’s largest Electric Car Exporting Countries”


Number of Electric and hybrid passenger cars in Finland 2010-2019-


In 2019, there were 24.7 thousand hybrid vehicles and 4.7 thousand electric vehicles registered in the country.