Electric Vehicles offer dramatically lower operating costs than conventional internal combustion engines. And it is an important consideration towards renewable energy or green energy for many countries and the world. As global warming becomes the first problem to destroy the earth or human life.

in 2017, Google became the first company to match 100% of its electricity consumption with renewable energy. Google is the largest corporate renewable energy purchaser on the planet. And surprisingly, it encourages car manufacturing companies to take steps towards making electric vehicles.

What is Electric Vehicle ?

An electric vehicle is a vehicle that runs on electricity alone. such a vehicle does not contain an internal combustion engine like the other conventional vehicle. instead, it employs an electric motor to tune the wheels.

The demand for vehicles is increasing at a fast pace. E-vehicles increase the need for renewable fuel resources.

The Importance of Electric Vehicle

The reduction of fossil fuel emissions through the use of Electric vehicles will help to prevent economic damage due to climate change. Climate change causes(PDF) a lot of damage to the global economy

An average passenger vehicle emits about 4.6 metric tons of carbon dioxide a year. and the only transportation sector contributes 29% of all greenhouse gases. and 91% of American households own at least one car. that’s a lot of pollution and what’s the solution? Electric vehicles are designed to Eliminate Emissions.

Advantages and Disadvantages of Electric Vehicles

Following are the Advantage of Electric Vehicle-

Following are the Disadvantages of Electric Vehicles

There are Three types of Electric Vehicles available –

Battery electric vehicles have reduced carbon emissions by more than half. while plugin hybrid and fuel shell vehicles are close behind.

you can buy vehicles for your business that are fully electric as well as ripples that are part electric that you’re able to run on electricity for shorter journeys. before continuing on petrol diesel power electric vehicles are almost silent and because there’s no clutch or gears their ideals are driving city pure E-vehicle endings and plug-in hybrids and extended-range electric vehicles.

while being driven on electric power emits zero tailpipe carbon dioxide Emissions and air pollutants man-made CO2 Emissions are a key contributor to climate change local care pollutants such as nitrogen dioxide and particulate matter are known to increase rates of heart, lung disease cancer, and asthma. battery electric vehicles are powered by 100% electricity and they don’t need any other fuels such as petrol or diesel.

Here is a list of Different Types of Electric Vehicles-

Complete Electricals vehicles powered by batteries. And currently, most manufacturers offer pure electric cars with a range of 100 miles to 200 miles.

The range of modern battery electric vehicles is continually improving and the range of 100 to 200 miles is becoming the norm making them suitable for the vast majority of E-vehicle everyday journeys.

Conventional fuel with an electric motor top-up. The battery range is less than 30 miles electric operation is mainly to Reduce CO2 Emissions.

plug-in hybrid electric vehicle for P18 greens combine petrol or diesel engines with a battery and electric motor to enable a longer driving range they can be plugged into the mains electricity to charge the battery and can drive on purely electric power for shorter distances.

Similar to BE-vehicles but it includes a small petrol generator on board. The range is extended by the generator charging the batteries on the go if needed.

Extended-range electric vehicles or new roads like E-vehicles are always driven by an electric motor which takes energy from a battery if the battery becomes depleted a petrol engine is used to generate electricity to power the electric motor and erode will provide you with an electric-only range of up to 125 miles depending on the model with the petrol generator providing a total range over 200 miles.

Uses energy stored as liquid hydrogen. A chemical fuel cell converts hydrogen to electricity without burning. The only emission is water, and these vehicles have a range of typically 300 miles or more.

A plug-in vehicle whether an E-vehicle or a plug-in hybrid may be suitable for you depending on your driving patterns from your local recharging infrastructure there are also electric vans available which is suitable for a range of applications with most models having ranges of more than 100 miles the energy saving trust can provide more information on any aspects of electric and low emission vehicle.

How Electric Vehicle is Good for the Environment? 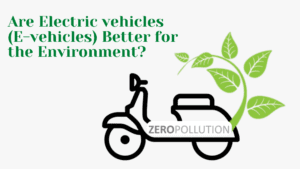 Each country is Moving toward the use the electrical vehicles and Norway is top of the list. Norway, when it comes to E-vehicles per capita, Norway stands out as the country with the most E-vehicles per person. Norway has around 55 electric cars per 1000 inhabitants, according to figures from 2018. and America, Germany is in the list comes after Norway.  let’s understand how Electric vehicles are Good for the Environment? see the graphs below –

Which Country had the Worst Air Quality in 2020?

Good air quality is very important for the health and well-being of people. And Norway is at the bottom of the list and India is at the third position according to the Global Air Quality Index (AQI) report.

What could be the reason that Norway is ranked 101 and India is placed At 3rd position on Global Air Quality Index (AQI). The simple and obvious reason may be population:

Norway’s 2020 population is estimated at 5,421,241 people in mid-year according to United Nations data. The population of Norway is equal to 0.07% of the total world population.

But there may be a reason for the use of a Complete Electric vehicle Environment. Norway is adopting a completely electric vehicle environment by 2025. According to a report, by 2025, there is a plan to eliminate the sale of all new combustion vehicles in the country and start promoting EVs. Also, public funds will be used to purchase new electric vehicle instead of combustion or fuel engines.

Another reason could be renewable energy in Norway–

Norway is a heavy producer of renewable energy due to hydroelectricity. More than 99% of electricity generation in mainland Norway is from 31 GW hydropower plants (source- Wikipedia)

A city like Norway is experiencing increased population growth and urbanization, which over time may contribute to more pollution in the city.

The transport sector accounts for 21 of global carbon dioxide or CO2 Emissions. road transport makes up a huge 75 of these Emissions the world is scrambling to cut greenhouse gas emissions and tackle climate change by limiting global temperature rises to 1.5 degrees Celsius.


Which Country has the Most Electric Cars?

The top five countries with the most electric vehicles per person are as follows:

Are EVs the Best Solution Towards Climate Change?

The short answer- Yes, No Doubt

A regular vehicle uses an internal combustion engine- you take fuel combust it and produce energy to make the car run. in the electric vehicle, you have a battery where the energy is stored, and it powers the electric motor, which gives power to the engine to run. of course, that battery also has to be charged with electricity.

the main reason why electric vehicle is better than internal combustion engine-powered vehicles is that they have zero Emissions in particular zero tailpipe Emissions which means no local Emissions would harm the environment.  then what’s the problem? Right, look deep at the life span of electrical vehicles-

How Electric Vehicle Can Affect the Environment?

There are three pillars – 1. Greenhouse gas 2. Air quality 3. Earth extraction. The first is the greenhouse gas that it emits that affects climate change and then the second is the air quality with toxic fumes.

when an Electric vehicle produces zero tailpipe Emissions it does not mean that they are used throughout its life cycle. And, Therefore it is important to look at the life cycle analysis of Electric vehicles rather than just their usage phase.

Batteries that power E-vehicles require raw materials, which are extracted from the earth. These materials include lithium cobalt-nickel and copper, which require heavy machinery in the extraction refining, and delivery process.  it uses a lot of energy which produces greenhouse gases and this could seriously impact the environment.

Lithium-ion (Li-ion) batteries, the power source for all-electric vehicles, are flammable. They contain a liquid electrolyte that stores energy and can overheat and combust with prolonged exposure to the wrong conditions.

The latest research estimates that battery manufacturing Emissions actually range between 61 kilograms and 106 kilograms of CO2 equivalent per kilowatt-hour of battery capacity, depending on the source of energy.

Assembling the rest of the car then involves a similar energy-intensive process on the assembly line for traditional petrol and diesel cars, when an E-vehicle collides with the road, unlike an internal combustion engine vehicle that drives the greenhouse through the exhaust Does not emit gases or air pollutants.

Emissions are produced from power generation in power plants that use E-vehicles to refuel when plugged into a charging point.

When we look at this number and the entire life cycle of Electric vehicle cars, researchers agree that an Electric-vehicle is at least three times better in terms of CO2 Emissions ICE Engine.