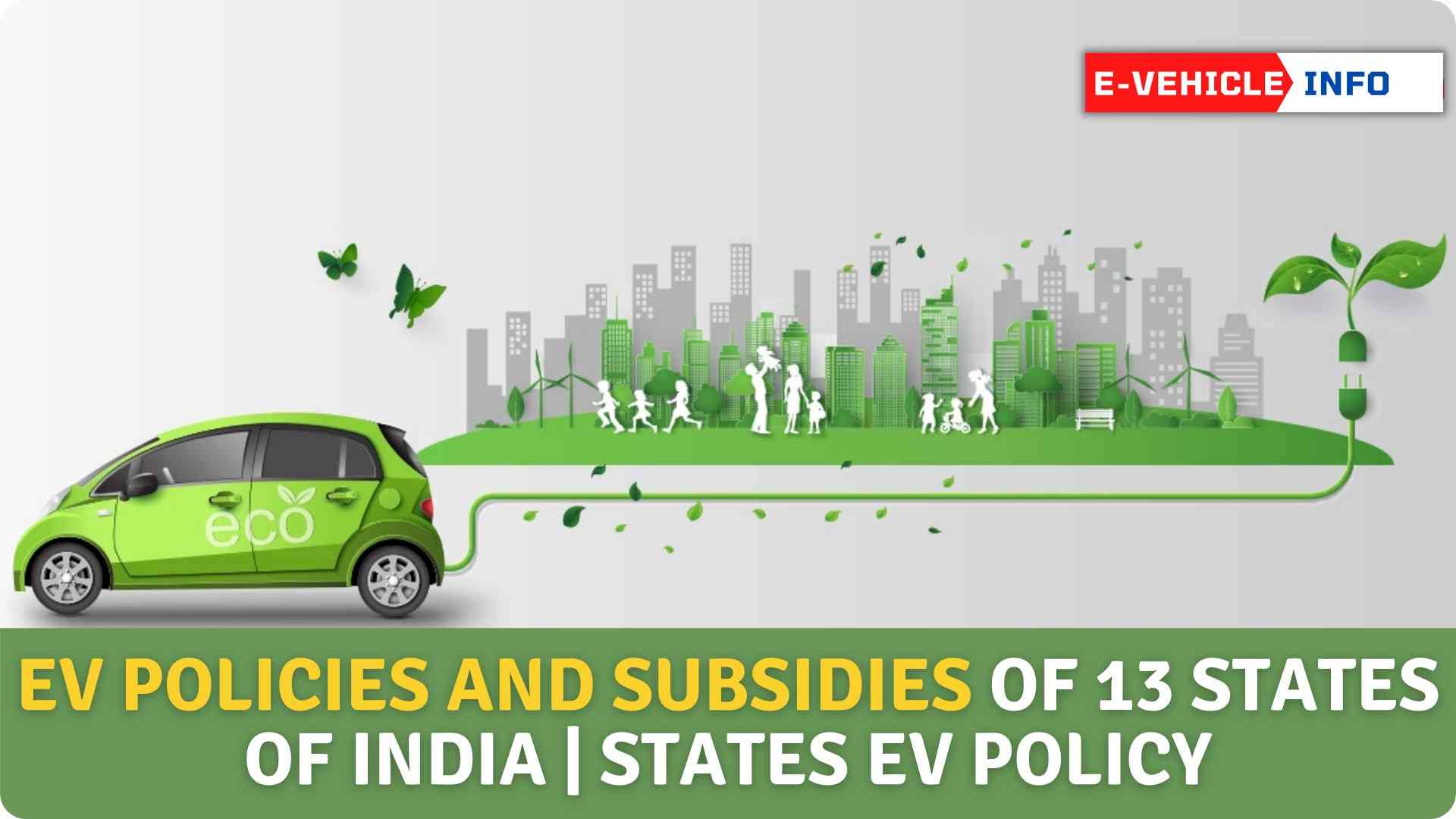 Currently, electric vehicles account for only 1.3 percent of total vehicle sales in India. Only 2.38 lakh electric vehicles were sold in FY21, compared to 1.86 crore petrol and diesel automobiles. Despite the difficult and stressful efforts to boost the use of electric cars in India, the country’s EV society remains indisposed.

The comparison done so far shows that the Electric Vehicle Policy of Maharashtra is the most suitable so far; For both the consumer and the manufacturers.

In this article further, we will be analyzing and supplementary discussing the Electrical Vehicle Policies & Subsidies in every state.

Keeping in mind the not-so-good state of the EV society in India, the industry is recently seen making developments, as today more than 13 states in India have notified electrical vehicle policies.

All 13 States EV Policies and Subsidies

The following is a total list of 13 states in India that announced EV policies and subsidies for electric vehicles.

In Maharashtra, the EV policy is the most recent and is also said to be the most user-friendly for both the ones buying and the manufacturers.

If you are planning to buy an EV vehicle it is noted that it will be cheaper in Maharashtra than any other state. as the government of Maharashtra promises to provide an incentive of Rs 5000/kWh for all E-vehicle categories.

To top it all up other than financial incentives, Maharashtra assures to provide incentives to the manufacturing company if they deliver a five-year battery warranty to their customers.

Following are the Highlights of Gujrat EV Policy 2021 to witness 2 lakh electric vehicles on the roads of Gujarat in the next 4 years, Chief Minister Shri Vijay Rupani declares Gujarat Electric Vehicle Policy 2021: Highlights

The Delhi government is making small changes to its electric vehicle policy, which was established in 2020. Guidelines for an electric bike taxi scheme similar to the one proposed by the Karnataka government could be one of the additions.

The Delhi government’s electric vehicle strategy, which was launched in August 2020 with a three-year framework, is one of the most comprehensive in the country. The scheme provides a subsidy of Rs 5000 per kWh for electric two-wheelers up to a maximum of Rs 30000.

The Delhi government, like Maharashtra, offers financial incentives in the range of Rs 5000-7000, as well as waivers of road tax and registration fees for electric vehicles. The majority of states intending to implement charging infrastructure in cities are aiming for at least one public charging station in a 3X3 kilometer grid.

If successful, this should result in enough charging stations in densely populated cities throughout several states. Slow chargers are getting a lot of attention in Maharashtra and Delhi, with both granting large CAPEX subsidies. 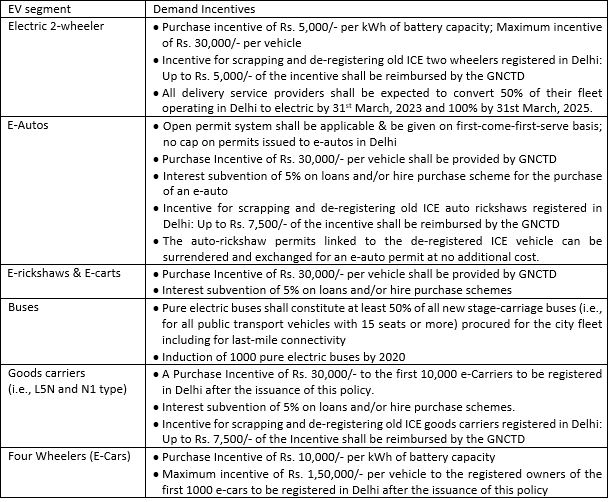 The Rajasthan state government aims to encourage the widespread use of electric cars by providing incentives on the upfront cost of EVs for early adopters. Rajasthan’s electric vehicle incentives, which include two- and three-wheelers, are slightly different from those given by other states.

EV customers would be refunded the State Goods and Service Tax amount, according to a notification issued by the Rajasthan Transport Department. They will also receive a one-time award on top of that.

Rajasthan, unlike other states, would pay EV customers a flat payment based on the battery capacity of their vehicle. This award will be available to vehicles purchased between April 1, 2021, and March 31, 2022, and registered until March 20, 2022. Oh, and don’t forget that to qualify for any of the advantages given under Rajasthan’s EV policy, the electric car must be purchased in the state.

If you buy an EV in Karnataka, you may be eligible for a subsidy via the union government’s FAME plan, which may be worth up to $15,000 per kWh, but the state does not give the same level of support as Gujarat, Maharashtra, or Delhi.

The Karnataka government recently announced the start of an electric bike taxi system that allows aggregators such as Rapido, Ola, and Uber to register as e-bike taxi operators. These taxis would be permitted to travel for 10 kilometers and may help electric vehicles gain traction in the final mile transportation segment.

In 2017, Karnataka became the first state to implement an electric car policy. The state recently changed its policy to provide investors in the electric car sector with a 15% capital incentive. It has also been determined that in the next 2-3 years, 50 percent of state government cars would be replaced with electric vehicles.

The cabinet decided to give a 15% capital subsidy to investors in the electric vehicle (EV) sector on the value of fixed assets over five equal annual payments, with the maximum land covered under this incentive being 50 acres.

Telangana’s electric vehicle policy was implemented in 2020. The state exempts all types of electric cars from paying road taxes and registering, but it does not yet provide the kind of incentives that Maharashtra, Delhi, and Gujarat provide.

Triton EV, a US-based electric car manufacturer, has inked a Memorandum of Understanding with the Telangana government to spend over 2100 crore in an electric vehicle production factory.

Officials from the Telangana government are presently examining the restructured FAME plan as well as other state government policies and may make modifications to their policy, which was announced in 2020.

Andhra Pradesh’s Electric Mobility Policy aims at a goal of 1 million EVs by 2024 and an establishment of 10,000 slow and fast EV charging stations by 2024.

The government of Andhra Pradesh further aims to stop the registration of petrol and diesel vehicles. All government vehicles would be transformed into electrical vehicles assures the government.

The state government looks forward to rolling out a total of  1 million EVs throughout all segments by 2024. There are plans of deploying 1000 electric buses in the state by 2030. 200,000 charging stations to be put up and a goal to turn 70% of the public transportation to EVs by 2030 under the 10 identified green routes.

In the next four years, the government of Madhya Pradesh aims to integrate 2,200 electric buses into the public transportation system. Shared e-rickshaws and electrical auto rickshaws will have incentives like exemption from road taxes and 100% waiver on parking chargers at any municipal corporation-run parking facility for 5 years.

The government prioritizes the electrification of the rickshaws by 2022. The goal of introduce charging stations at every 50km along the highway. An extra incentive of Rs 7,000 per kWh is proposed in Bihar for e-2Ws and e-3Ws that use lithium-ion batteries rather than traditional lead-acid batteries. These are novel methods to subsidy design that organize and deliver the subsidy in a way that maximizes its impact.

. According to the State Government’s decree, after careful consideration, it has decided to exclude all battery-operated transportation and non-transport vehicles from paying any taxes. The state has taken several steps to improve the electric vehicle system in the state.

Tamil Nadu intends to build the country’s first park dedicated only to the electric car manufacturing eco-system. Units that purchase land through a sale or lease will be eligible for a stamp duty exemption of 100 percent until December 2022. SIPCOT, SIDCO, and other government organizations will give a 15% subsidy to units that secure land from them.

If the investment is made in the southern areas, they will receive a 50% subsidy.

Following are the Highlights of the Kerala EV Policy-

By 2025, the major goal is for battery electric vehicles (BEVS) to account for at least 15% of new vehicle registrations. He stated that the government will encourage the use of electric vehicles across all segments and build a network of public charging stations.

The government of Himachal Pradesh has proposed a new Electric Vehicle Policy for the year 2021, to promote sustainable, safe, environmentally friendly, inclusive, and integrated transportation solutions, as well as establishing Himachal as a model state for EV adoption among mountainous states.

The announcement made by Tesla would introduce the Model 3 in India, as well as the debut of Ola Electric, has sparked a lot of interest. While Ola plans to debut its electric scooter in less than 20 days and wants to sell over a million units this year, Tesla will shortly begin sales in India and is looking into the potential of producing Tesla automobiles there in the future.

Tesla is in negotiations with at least six states, which have given them land and other incentives. State competition may not only lower EV pricing for consumers, but it may also provide electric car manufacturers with some extremely profitable agreements.

Elon Musk and Karnataka CM and Union Road Transport Minister, Nitin Gadkari, confirmed Tesla’s presence in India earlier this year, which came as a pleasant surprise to Indian electric car fans. The Company, Tesla intends to open showrooms in Mumbai, Delhi, and Bangalore in the initial phase of its Indian expansion.

Aside from the fiscal incentives that are lowering the upfront cost and total cost of ownership of EVs, most states are enacting significant regulatory reforms and tax exemptions for EVs, such as an open permit system for e-autorickshaws, waivers of road tax and registration fees, and provision for EV reserved parking, all of which would go a long way toward making EVs competitive with their ICE counterparts.