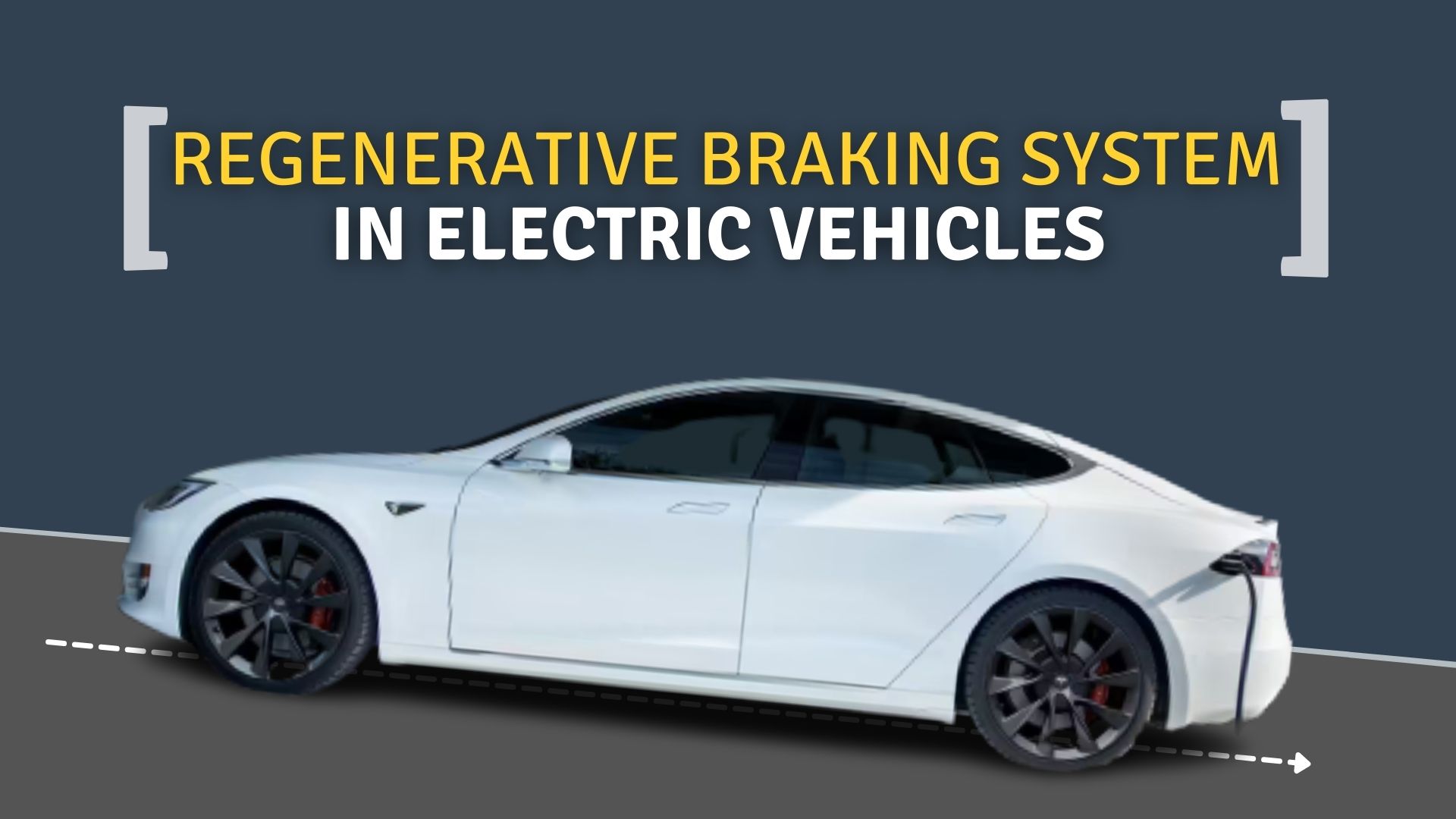 According to Wikipedia, regenerative braking is an energy recovery mechanism that slows down a moving vehicle or object by converting its kinetic energy into a form that can either be used immediately or stored until needed.

This mechanism retrieves some of the energy that’s lost during braking and in return uses the energy as a mechanism to recharge the battery and thereby improve not just the efficiency but also increases the range as battery regeneration and storage gives a pathway for introducing larger batteries for greater range without increasing the time required for charging. 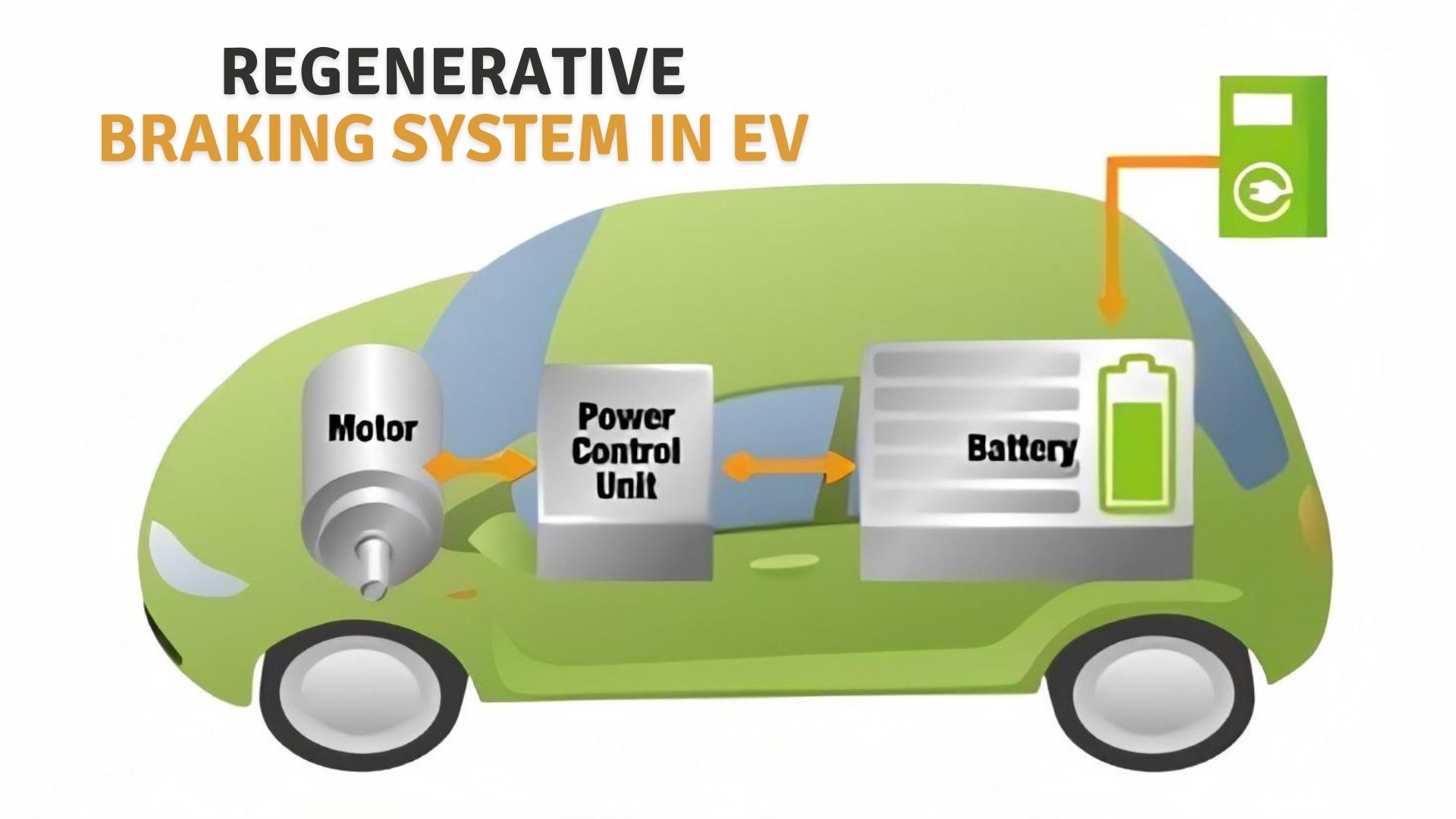 What is Regenerative Braking System

While in motion, an Electric Vehicle like (Electric car, bus, and motorbike) carries momentum and kinetic energy. This kinetic energy while braking is lost to the environment as heat due to friction as braking.

As per the first law of thermodynamics – Energy can neither be created nor be destroyed but can be converted from one form to another, a part of the energy is converted or to say “regenerated” and driven back to the battery through the traction motor.

How Does Regenerative Braking work in EV

In an Electric Vehicle, the moment the vehicle stops accelerating, the powertrain automatically engages a regenerative braking system to cover the loss of energy due to deceleration to transfer the energy back to the motor which now acts as the generator to recharge the battery.

Thereby there is a longer range as the battery is consistently getting recharged (albeit not completely) and there are studies and research that shows that battery aging is reduced considerably with the use of regenerative braking, thereby it also plays a vital role in the reduction of ownership costs as the cost of replacing a battery is reduced which is the lynchpin for the reduction of the spread of electric vehicles.

Regenerative Braking in Electric Vehicles and its Efficiency

As we have already discussed the basics of the braking system, we’ll now focus on the impact it has on the EV spectra.

Unsurprisingly the introduction of regenerative braking was used in a prototype economic EV in 1968 – the Amitron. Although the car was just a prototype, it was considered too advanced for its age and the advent of hybrids paved the way for the usage of EVs. Even formula 1 car use regenerative braking and they were actually the pioneers as their Energy recovery system provided their cars an additional power of up to 81hp.

The mode of regenerative braking also depends on the setting that the driver and the car provides.

In a Tesla, there are two common modes – Standard and low where the maximum energy and faster deceleration are observed while the latter focuses on reduced energy but tries to maintain the same speed.

And lately, there are three added modes – the creep, the roll, and the hold. In Creep the motor disengages regeneration at idling speeds and uses motor torque while parking whereas the roll mode after disengaging keeps the vehicle in neutral.

When it comes to holding, regenerative braking is utilized thereby reducing brake wear and it not just increases the restoration of energy but also automatically gets engaged to friction brake while the brake is stopped thereby there won’t be any movement until the vehicle is either accelerated or the motor is shut.

The efficiency of a regenerative braking system although depends on conditions such as the kind of vehicle, model, drivetrain, and loss of energy to noise, light, heat, etc, the average efficiency is 70% but it is not an indicator of actual efficiency to accelerate/charge.

This depends on the parameters mentioned above and also on one more major factor, driver and driving conditions as downhill driving harnesses greater energy restoration than uphill driving and conditions such as vehicle size and as we can see with higher momentum in heavier vehicles, the heavier the vehicle is, the greater the restoration of energy

Regenerative braking occurs in both DC and induction motors. In a DC shut-off motor, when the decelerating energy is less than the no-load speed, the electromotive force exceeds the supply, producing a negative current in the armature and thus converting the motor into a generator, in the case of series, It is used in the case of constant motion when the electromotive force does not exceed the supply voltage, thus used in lift hoists, a common method of converting a series motor to a shunt motor.

In the case of an induction motor, when the speed of the motor is greater than its synchronous speed, the electric current reverses because at this point the relative motion between the conductors and the gap in the air while the phase angle is increased and greater than that respectively. 90°. Also in the case of low speeds, regeneration with a change in frequency can be achieved.

When Does Regenerative Braking Activate in an Electric Vehicle and how Efficient is it?

The regenerative braking activates the moment the vehicle decelerates. Depending on the model/setting, the amount of energy that’s regenerated varies although it provides an improved energy gain of a minimum of 6% (source – Argonne National Laboratory data, SAE 2013-01-1462) 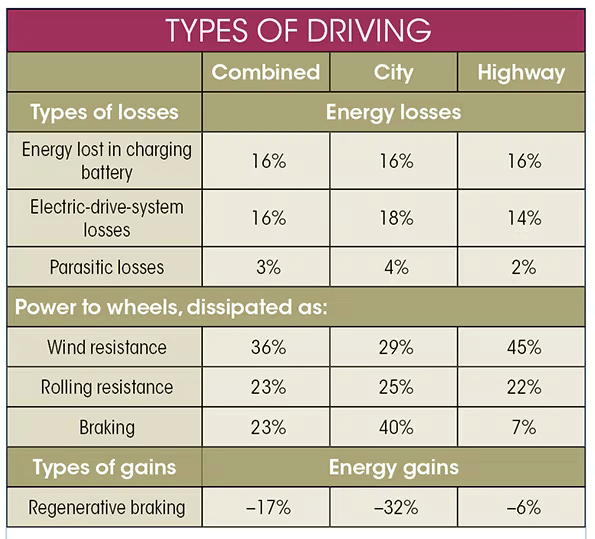 Which Storage System is Best for Regenerative Braking System in Electric Vehicles and why?

There are 4 kinds of storage systems – Electromagnetic – where the motor acts as a generator for powering the batteries; flywheel – where the kinetic energy is stored by a spinning flywheel to provide additional torque – thereby increasing power output;

Every storage system has its perks and drawbacks, the electromagnetic is the common and is economical while it is not exactly the most efficient way as the motor works as a generator, flywheel’s loss of energy is higher yet it provides a power input that can be worked as an alternative for turbo-charged engines, the combined is expensive and cumbersome while the mechanical and the hydraulic form although can store the maximum energy their transfer is slow.

Thus, it depends on the application. A family car can prefer the electromagnetic, while flywheel suits a sports car, and a truck/heavy vehicle can adapt to a Mechanical and hydraulic energy storage system.

What are the types of Regenerative Braking Systems?

What are the Components Required for a regenerative braking system?

Differences Between Conventional and Regenerative Braking