Electric cars are beginning to revolutionize the transport industry and many manufacturers are racing to manufacture their own EV batteries. It will eventually to who can make the cheapest battery with the most range and fastest charging speed, and while most industries still use lithium-ion batteries, Solid-state batteries have been gaining more headlines recently.

Because breakthroughs are being made are now finally bringing Solid-state batteries closer to mass production and electric vehicles from a few years ago.

Solid-state batteries were seen as a distant technology that revolutionized electric vehicles and now it is less than a year before prototype vehicles arrived.

How Toyota and Volkswagen are racing to get new batteries in electric vehicles. When they will be in production vehicles and whether the challenges can still move forward.

Benefits of Solid-state Battery such as-

Many companies have been researching the technology for decades. Companies like Toyota have claimed to have cracked the code for Solid-state batteries, while many have questioned the Japanese automaker’s strategy to manufacture hybrid and fuel cell technology with the same battery-electric vehicle because rav4 EVs do not put their money to metal. Whose production ended in 2014.

The company has been quietly working on solid-state technology since 2012 and in 2020 Toyota announced a prototype vehicle using solid-state battery technology that will soon be revealed to the public. 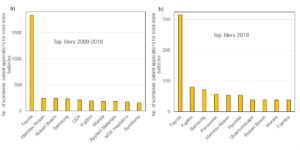 Given that the Japanese government promotes the domestic development of decarbonization techniques such as Solid-state batteries, with an aid fund of $ 19.2 billion. 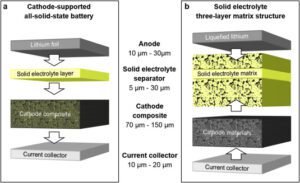 A conventional lithium-ion battery consists of an anode separated by a cathode and a polymer separator that keeps the electrode separate and two electrical contacts on each electrode liquid electrolyte floods an entire cell that acts as the medium Through which lithium ions travel while discharging a battery, charged particles are made of sheets of carbon and sometimes silicon through the separator.

Note- “Today’s Solid-state batteries have not yet reached such energy density, but research is being done to overcome the main challenges.”

Read More: Why Should you Buy an Electric Vehicle in India?

Additional advantages of the Solid-state battery are-

Some limitations are facing the development of Solid-state batteries are –

The first obstacle is the dendrite problem. Lithium metal is highly corrosive, meaning that chemically inert and solid electrolytes are required, over time the dendrites increase to the extent that they destroy the battery in the form of dendrites. When batteries are charged and bent they have spike-like structures that can develop to the extent that they can puncture the dividers causing the battery to short-circuit.

“However, a study published in 2018 confirms that researchers have found a solution to work around the problem using ceramic separators.”

The second problem is that the battery does not work very well in low temperatures which raises questions about its long-term durability.

The third problem is cost. Historically, Solid-state batteries have been very expensive. In 2012 it was estimated that a 20 ampere-hour solid-state battery cell based on the then technology would cost $ 100 000 today for an EV between 800 and 1000.

The only remaining problem seems to be temperature performance making it a viable alternative to electric vehicles that have to deal with all kinds of changing environments and climates. But companies like Quantum Scape have claimed that there will be no problem with the battery working under real-world conditions. 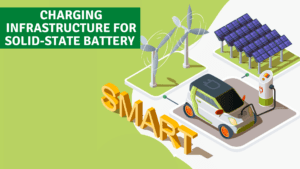 Recharging stations should be able to handle a much faster charge than conventional Li-ion batteries. Charging stations with devices that cannot withstand new technology may not be compatible with Solid-state batteries at full speed and can cause thermal runoff. Charging technology will need to be up to the task of handling very large charging power that has the ability to obtain a Solid-state battery.

Toyota reportedly enables an EV range of about 310 miles or 500 kilometers which would make Toyota nearly on par with Tesla. But Toyota beats Tesla in charging time from 0 to 80 percent with only 10 minutes. The battery holds more than 80% capacity after 1000 charge cycles, which means approximately 310,000 miles or 500,000 KM during the lifetime of the vehicle.

The new solid-state battery reportedly will be used in an SUV based on Toyota’s E-Teng platform, with a prototype expected to be revealed later this year and a full production model by 2024.

This is not some vaporware. Japanese materials companies are already setting up infrastructure to supply materials to automakers. Mining companies are starting to increase their production rates for lithium and a mining company called MITSUI KINZOKU Will launch a pilot facility of solid electrolytes.

Quantum Scape is backed by Volkswagen, it was founded in 2010 and became a publicly traded company in November 2020. after a breakthrough, Quantum Scape claims a volumetric energy density of 1000 watt-hours per liter which is nearly double of the best batteries used in electric vehicles today.

This can enable EVs to travel more than 600 miles or 1000 kilometers on a single charge and charge from zero to 80 in 15 minutes. The battery retains more than 80 percent of its original capacity after 800 charge cycles, which means 480,000 miles or 770,000 kilometers during its lifetime Of an electric vehicle.

For the full-scale factory, Quantum Scape estimates that it will build a 50-50 venture with Volkswagen at $ 1.6 billion to build a battery factory, which is scheduled to start selling in 2024. Being able to produce inexpensive energy-dense and powerful concrete state batteries would certainly be a breakthrough that would push Volkswagen and Quantum Scape ahead of the competition if they could achieve it in the next three to five years.

Very soon electric vehicles will cost less than traditional gasoline vehicles, from where the transport industry will never again.