Demand for the global electric vehicle market is expected to reach a whopping estimate of over $ 1200 billion by 2027, which is massive. Electric vehicle industry is in a growing position and growing at a tremendous pace. The only thing that can push this growth more is the innovation of new and more efficient is solid-state batteries.

Tesla is currently using lithium-ion batteries and they are trying to improve them but there are some more promising battery technologies in which solid-state batteries are one of them.

What is a Solid-state Battery?

A solid-state battery is a battery technology that uses solid electrodes and a solid electrolyte, instead of the liquid or polymer gel electrolytes found in lithium-ion or lithium polymer batteries. (Wikipedia) 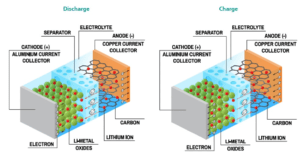 it has very promising features that can literally change the future of EVs. Companies operating in solid-state batteries according to current technology, anyone who can develop a cost-effective and efficient solid-state battery will rule the EV. The world developing practical solid-state batteries has generated considerable interest from automotive companies and many of them are vying to develop an ideal battery.

Read More: Solid-State Battery for EVs | Toyota, and Volkswagen Towards a Battery Revolution

Which will skyrocket their position in the automobile industry in the coming years.

Quantumscape is an American company that researches solid-state lithium metal batteries for electric cars. It was founded in 2010 by Jagdeep Singh, Tim Holme, and Professor Fritz Prinz. In 2018, Volkswagen invested $100 million in the company and becomes the largest shareholder of QuantumScape.

it is a battery startup that counts Volkswagen AG as its largest shareholder, with another tech titan Bill Gates as their investor, and its board member includes X Tesla executive J. B. Straubel.

The quantum scape currently seems to be the closest to actually making a better battery. It has announced surprising performance figures in late 2020. There were some difficulties in the production of solid-state batteries and it states that they have solved the problem with a new design using lithium-metal anodes. According to quantum scapes data, their batteries can deliver up to 80 percent longer range than today’s lithium-ion batteries. Its cell can charge up to 80 capacity in 15 minutes and retain more than 80 percent capacity after 800 charging cycles.

Toyota has been sluggish in its efforts to launch electric vehicles to compete with a large number of highly capable EVs, though many were skeptical.

The plan was for the Japanese automobile giants, in fact, in partnership with Panasonic, Toyota was developing a solid-state battery, which currently holds more than a thousand patents covering solid-state batteries. Batteries are designed as a total game-changer for EVs to allow more efficient ion transfer between electrodes centered on sulfur-based electrolytes as they are faster charged. And also allow more range in similarly sized packages.

The company claims that its new SUV will be fully charged from the flat in 10 minutes and will offer a range of 500 kilometers, a still unknown SUV expected to debut in limited quantities in 2021.

It seems that Samsung also wants a piece of this solid-state battery technology. Samsung presented a study this year on high-performance long-lasting all-solid-state batteries instead of lithium metal anodes.

Samsung decided to use a thin silver carbon layer and according to researchers, it produces a high-capacity battery that prolongs cycle life and protects the battery by 50 percent and less volume than a normal lithium-ion battery makes. Samsung’s prototype can enable a 500-mile electric car range and bicycles on more than 1000 charges in a more secure package.

These are definitely some promising projects that are giving us a bright hope of a breakthrough in the EV sector.

Tesla had unveiled a new table battery cell ‘4680’ in a larger format with new chemistry and announced its plans to produce it in-house. and which could improve the range of an electric car and power these new tablet cells, called the Tesla 4860 cells. the company’s EV batteries will give five times more energy capacity and enable them to be six times more powerful and 16 range increments for Tesla’s vehicles.

The company also said that the new batteries would be 56 percent less expensive to manufacture.

Quantum Scape Vs Tesla Vs Toyota Vs Samsung: Solid-state Batteries

The current 2170 batteries used in Tesla’s Model 3 have an energy density of about 260-watt-per-kilogram and Tesla CEO Elon Musk has indicated 50 higher energy densities in three to four years.

Solid-state battery: quantum scape prototypes show that it provides somewhere between 380 and 500-watt-hours per kilogram, but they plan to set up the first production line in 2025, while Elon says lithium-Ion ones can be obtained one or two years in advance.

The Tesla Supercharger can expect the 2170 battery to charge 10 to 80 percent and the 4680 in about 30 to 40 minutes. According to quantum scape data, a solid-state battery of about 25 minutes will be fitted. To charge up to 80 capacity in 15 minutes.

Quantum scape ceramic separators operate at high rates of electricity which allows it to give the battery that capacity and Toyota says that their batteries can be fully charged in 10 minutes.

Tesla’s 2170 battery pack costs $ 156 per kilowatt-hour according to researchers, which would cost around $ 14 000 for a 90-kilowatt-hour pack, but according to Elon Musk, 4680 batteries would be half as expensive as the company Present cells.

The cost of a typical battery is currently around $ 220 per kilowatt-hour, but quantum scape and some other developments can significantly reduce the price because these batteries require less cooling during the manufacturing process that protects. Can make it cheaper to produce. Tesla uses lithium-ion batteries that contain liquid electrolytes and are flammable and any of these leaks can cause safety concerns for the battery and overall vehicles Even at very high temperatures.

According to a study, researchers found that Tesla’s batteries should have no problem reaching the 500 000 mile mark, and Elon promised that Tesla would soon expand its electric cars to more than 1 million miles. He Will is able to provide electricity for his lifetime

Solid-state battery:  quantum scapes are claimed to be designed for hundreds of thousands of miles of driving.

They are not expected to be out in two or three years for availability. Quantum Scape declared that it would have a production-ready solid-state battery by 2025.