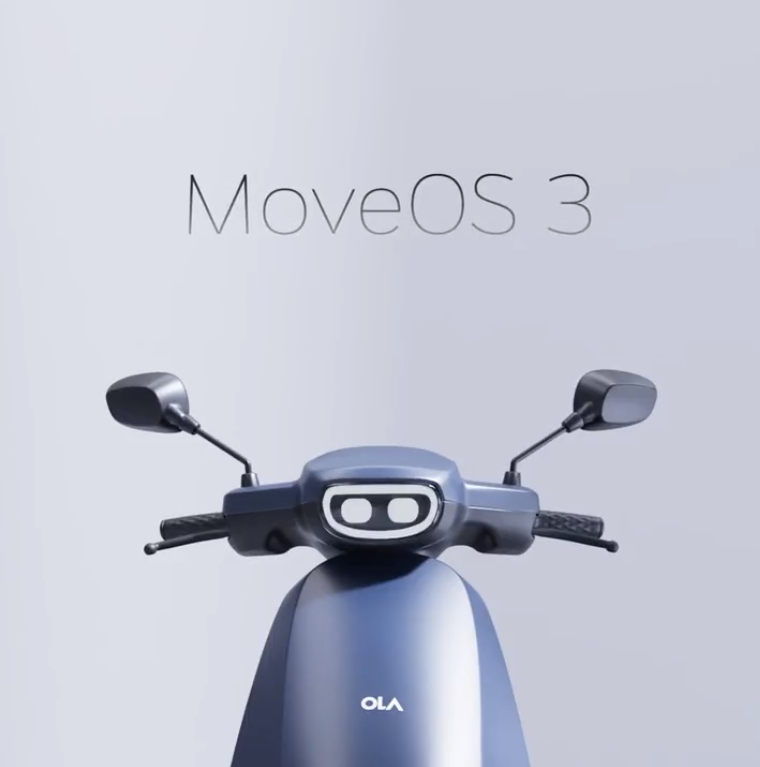 According to Ola Electric’s founder Bhavish Aggarwal, MoveOS 3 will be released for all users from next week onwards. He claims that the MoveOS 3 significantly enhances the software’s functionality and performance. MoveOS 3 was previously exclusively accessible to beta testers.

The latest OS update’s imminent release was announced over the holiday season. This would be Ola Electric’s third upgrade in a year. In August 2022, MoveOS 2, the current firmware technology used in all-electric two-wheelers was released.

He confirmed this in a tweet and added that the upgrade will begin rolling out to all users starting next week via the OTA route. Every vehicle in the brand’s lineup will be able to use the upgrade.

Many new features have been introduced and incorporated into the MoveOS 3 update. Ola has offered a remarkable number of features and specifications at an unbelievable price. There have been more than 100+ improvements in MoveOS 3.

The scooter has a hill hold control that keeps it stable while descending an incline. The hill should be simpler to climb as a result. Up until this point, the scooter would roll back a fair distance because the throttle input would take a moment to register.

The upgrade also includes Low, Default, and High regen settings that are tailored specifically for Indian road conditions. Low is ideal for interstate cruising, Default is ideal for daily errand-running through the city, and High is ideal for riding in city traffic. The business asserts that the regen capabilities have improved by 80%. Slowing down to gain more speed allows the scooter to recharge as well.

The company claims that the new technology update’s modified torque mapping would enable a 0–60 km/h time of just 4.5 seconds.

The latest software upgrade has also made Hypercharging possible, allowing the electric scooter to receive a full 50 km charge in just 15 minutes. The application now displays the locations of the Hyperchargers as Ola Electric works to increase the number of them. With just one minute of charging, the hypercharger can increase the scooter’s range by 3 kilometers.

The S1 and S1 Pro will now have proximity unlock thanks to MoveOS 3. Therefore, in order to unlock the scooter, the rider no longer needs to input the pin code or use a smartphone application. Due to proximity unlock, the scooter would be able to identify the phone and unlock itself without using keys. This function is known as the “6th sense” by the company. Users will be able to lock and unlock the scooter while walking. This suggests that the electric scooter doesn’t need to be manually locked or unlocked, which makes the overall experience simple and hassle-free.

According to Ola Electric, the scooters’ acceleration has improved in both Sports Mode and Hyper Mode. A brand new function called Vacation Mode enables the scooter’s battery to enter a state of sort of hibernation that lasts for up to 200 days.

Party mode has also been introduced. The Party mode function synchronises the scooter’s headlight with the music being played by the rider. The rider has control of this function thanks to the exclusive app.

On the scooter’s dashboard, the rider also has access to the call screen. Riders can see who is calling by simply looking at the dashboard.

Now documents can also be stored on the scooter, and call notifications and auto replies are also made available. Riders have access to many cloud-based profiles, each of which can be heavily customized. Both the Vintage and Bolt themes are available for customization. Moreover, Ola has added profiles and widgets to the dashboard as well.

Other features include, among others, danger lights, smart themes, granular light and sound controls, better LTE and wifi connectivity, better GPS connectivity, a touch response speed of 28% faster than average, 200+ days of vacation mode, 14% less battery use while you sleep, and 4% faster home charging. The mobile app has undergone certain updates as well.

In terms of functionality and usability, MoveOS 3 will be a significant improvement over the current software. The proximity unlocks feature, for example, will significantly improve the user experience. This update will also bring some changes to the charging process and power transmission that could lead to increased efficiency.

These upgrades not only fix the software’s faults but also include a number of brand-new features for both current and potential users.