Electric Vehicles and their Importance

An electric vehicle operates on an electric motor instead of an internal combustion engine that generates power by igniting a mix of fuel and gases. Such a vehicle is seen as a possible replacement for the current-generation automobile to address global warming, rising pollution, depleting natural resources, etc.

The Concept of EVs has been around for a long time, it has drawn a quiet amount of interest in the past years amid a rising carbon footprint and other environmental impacts of fuel-based vehicles and To promote EVs Indian Government announces many helpful Initiatives for Electric Vehicles | know What?

Read More: The Ola’s Electric Scooter in India | All you Need to Know

Electric cars are highly predicted to be the next disruptive market force for transportation and technology. The electric vehicle revolution in India is underway, and two-wheelers and three-wheelers are leading the charge. 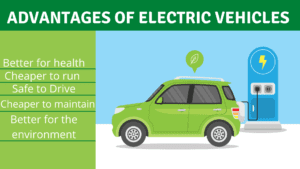 Let’s look at a few benefits of electric vehicles over conventional petrol or diesel cars.

The price of the electricity required to charge an electric vehicle is around 40% less than the cost to use petrol for a similar-sized vehicle driving the same distance.

A Battery powered Electric Vehicle has fewer moving parts than a conventionally fuelled car. Servicing is easy, less frequent and overall cheaper than a petrol/diesel vehicle.

Less pollution: You can reduce harmful air pollution from exhaust emissions by choosing to drive an EV.

Renewable energy: If you have a solar panel system and charge your car during the day, you can reduce your greenhouse gas emissions.

Reduced harmful exhaust emissions are good for Human health too. The better air quality will lead to lesser health problems and costs caused by air pollution. EVs are also quieter than petrol or diesel cars, which means less noise pollution.

Electric cars undergo the same testing procedures test as other fuel-powered cars. An electric vehicle is safer to use, given their lower centre of gravity, which makes them more stable on the road in an accident.

The Indian government has undertaken multiple initiatives to promote the manufacturing and adoption of electric vehicles in India. With the support of the Government Initiative, electric cars have started penetrating the Indian market. However, the availability of adequate Charging  Infrastructure is one of the key requirements for the accelerated adoption of electric vehicles in India. Many government subsidies are introduced to support the EV market in  India.

India is the fourth-largest auto market globally, and some estimates suggest there are close to 170 active investors in the country’s EV start-up ecosystem.

To promote the adoption of EVs, the Department of Heavy Industry formulated a FAME India Scheme (Faster Adoption and Manufacturing of (Hybrid and) Electric Vehicles in India)  in 2015.

The government has launched the following initiatives for Electric Vehicles industry  promotion in India:

The Indian government has devised many Electric Car policies and Initiatives such as  National Electric Mobility Mission Plan, FAME-I and II, National Mission for Transformative  Mobility and Battery Manufacturing, the Phased Manufacturing Program, Advanced Chemistry Cell Production Linked Incentive Scheme to give the required boost to the sector. The FAME (Faster Adoption and Manufacturing of (Hybrid & Electric Vehicles) scheme has been the primary incentive scheme to push for EV adoption.

Availability of the charging infrastructure is one of the crucial requirements for accelerating electric vehicles’ adoption in India. Considering this, the Ministry of Power has issued  “Charging Infrastructure for Electric Vehicles – Guidelines and Standards”.

To boost electric mobility in India, the government has announced its plan to support 15.62  lakh electric vehicle through subsidies.

Nitin Gadkari, the Union Minister for Road Transport and Highways (MoRTH), announced in Parliament that phase-II of the FAME India scheme is being implemented with total budgetary support of ₹ 10,000 crores. With this, the government has planned to support about 62,000 electric passenger buses and cars and 15  lakhs electric three- and two-wheelers in India.

Mr Nitin Gadkari said that if Elon Musk-led company in India talks about making its EV in the country, then India is ready to give incentives to reduce the cost of production of Tesla.

Currently, states including Delhi, Gujarat and Telangana have a firm EV policy in place with others expected to follow. Delhi is poised to be the nerve centre of India’s electric vehicle revolution.

India expects 25% to 35% electric two-wheeler penetration and 65% to 75% in electric three-wheelers by 2030, with passenger vehicle electrification.

CNG-driven public transport fleet to e-mobility, Delhi has been an avid promoter of clean mobility solutions for a very long time. Delhi Government rolled out the “Delhi EV  Policy 2020” in August 2020. The policy’s primary objective is to accelerate EV adoption,  especially in the mass category of two-wheelers, public/shared transport vehicles & goods carriers, target 25% Battery Electric Vehicles in all new vehicle registrations by 2024. Also,  layout measures to support the creation of jobs in driving, selling, financing, servicing, and charging EVs. This policy will be valid for three years from the date of its issue. 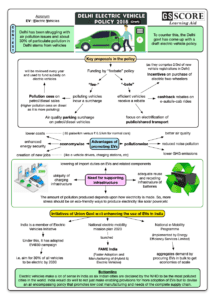 India has a lot to gain by converting its ICE vehicles to EVs at the earliest. Its oil-import bill would considerably reduce. ICE vehicles are a significant contributor to pollution in cities,  and their replacement with EVs will improve air quality. There is a possibility that we can become leaders in small and public electric vehicles.

However, this would require innovations, a policy regime that encourages access to the latest technologies. and some effort by the Indian industry to achieve global competition by acquiring the necessary scale and cutting-edge technology for the EVs Industry.

How Norway Become the Fastest EV Adopter in the World?

How Norway Become the Fastest EV Adopter in the World?

By the most conservative estimates, the world's car fleet exceeds 1.5 billion vehicles. At the same time, the total number of electric vehicles is...
Read more
Electric Vehicle Updates

The trend of electric bikes is increasing rapidly in India. And the Indian e-bike market was valued at USD 1.02 million in 2020 and...
Read more