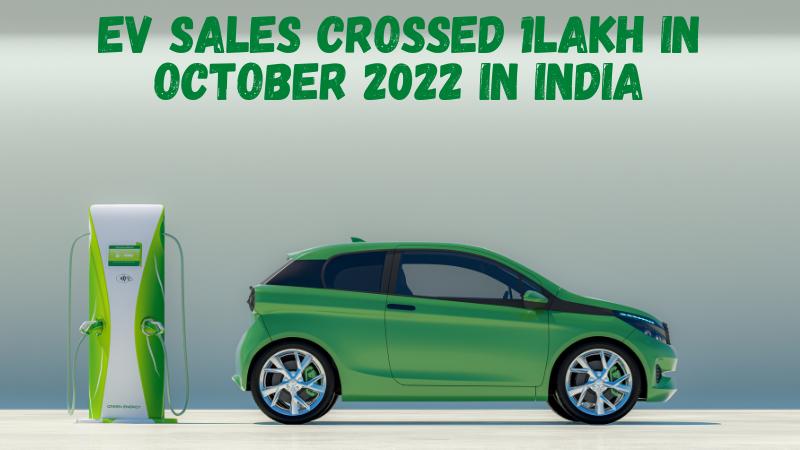 Electric vehicles saw a surge in sales and they made a hitting point by selling 1 Lakh vehicles this year. This rapid sale could be owned to various factors, the biggest reason being the war between Russia and Ukraine that made the matters worse and led to hefty prices incurred on the oil barrel. As of November 4, 2022, the price of WTI crude oil is 92.61 per barrel. This brings a heavy toll on the pockets of normal citizens who appeared worried. EVs were bringing some panacea to the mobility sector of India. On average 140 EVs are registered on a daily basis.

The Indian economy’s automotive industry currently ranks fifth globally, but by 2030 it is projected to move up to third place. The transition to electric vehicles has begun, despite the fact that the majority of vehicles still run on gasoline. In October 2022, total EV sales grew month over month by 28.1% to 1,19,889 units. Additionally, there was a y-o-y increase of over 200%. Sales of electric vehicles picked up in 2022, increasing up to 200% for all two-wheeler, three-wheeler, and four-wheelers. This shows that people are dedicated to buying EVs

In the first quarter of FY2022, Ola Electric just edged out Okinawa Autotech by 532 units, indicating that there is intense competition for the top spot.

With the first-ever deployment of 20,000 electric two-wheeler units in India in October, Ola Electric continued to hold the top spot this month. The start of the holiday season and the increase in sales were mostly caused by physical retailers. While Hero Electric further slipped to number four, Okinawa kept the number two spot. Ampere surged to rank three after seeing a more than 50% rise in sales from the previous month. Jitendra new EV tech unexpectedly replaced Revolt in the top 10 clubs.

Manufacturer of e-rickshaws and e-carts Yatri, based in New Delhi, sold 3,151 e-three wheelers in October 2022, placing it at the top of the retail sales list. In Northern India, the e-rickshaw brand Yatri is well-known. The business makes electric rickshaws, electric carts, and electric loaders.

Mahindra Electric, with 2,953 sales in October, is in second place. Electric pick-up/delivery/cargo vehicles and auto rickshaws are also available from Mahindra. The Mahindra Treo is India’s most popular electric auto rickshaw. The brand’s other electric 3-wheelers are the Treo Yaari, Treo Zor, and Zor Grand.

The overall number of E-cars sold in October 2022 was 4,984 units, up 17.6% month over month but more than 2.8 times year over year in registrations. The E-car has been operated by Tata Motors. Additionally, sales this month witnessed more than 80% of the total E-car registrations held by the Company. Hyundai was the only other automaker to have a modest uptick in E-car sales this month, aside from Tata Motors and MG Motor. This month marked the beginning of Kia Motors’ E-car sales.

The demand seems to be rising every day and with the government providing subsidies on electric vehicles along with a GST cut, people have been inclined to use this opportunity and invest in the advancing technology along with saving bucks on petrol filling.