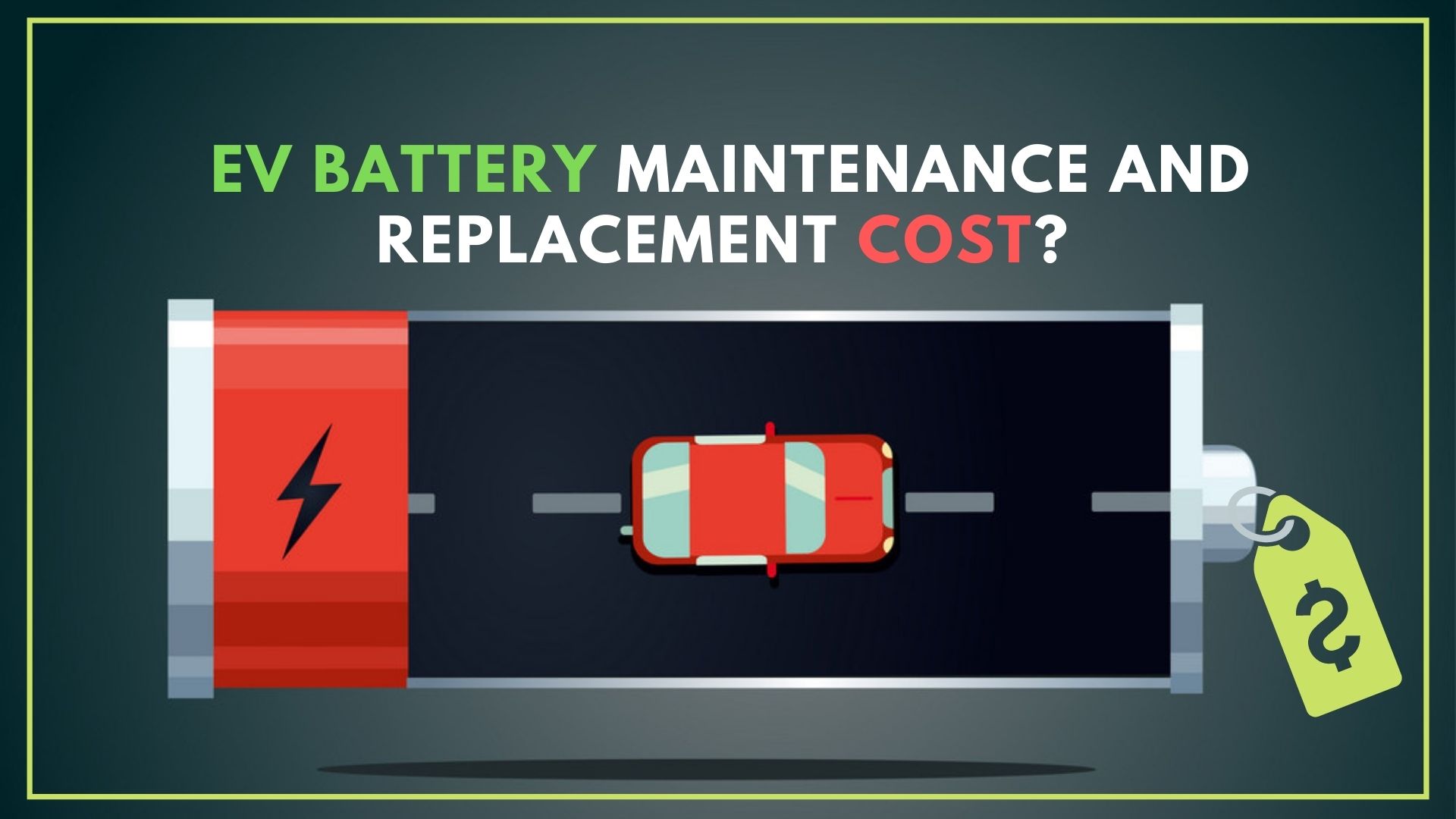 This article includes information about electric vehicle batteries and they’re frequently asked questions like What are EV battery maintenance and replacement costs? This includes some of the most FAQs on the internet about EV batteries, and we’ve answered those questions here-

Electric vehicle batteries are different from starting, lights, and ignition (SLI) batteries in that they are deep-cycle batteries that are meant to provide power for long periods.

Electric car batteries are distinguished by their high power-to-weight ratio, specific energy, and energy density; Smaller, lighter batteries are preferred as they reduce the weight of the vehicle and therefore increase performance. Most contemporary battery technologies have lower specific energy than liquid fuel, which has an impact on the maximum all-electric range of cars.

Due to their high energy density compared to their weight, lithium-ion, and lithium polymer batteries are the most prevalent battery types in modern electric vehicles.

Electric vehicles require very less routine maintenance aside from replacing consumables such as tires and windshield wiper blades. Electric motors and batteries do not require the same level of maintenance as gasoline and diesel vehicles, such as oil changes, tune-ups, and filter changes.

That isn’t to say that owning an electric automobile is as simple as plugging it in and forgetting about it.

This article will assist you in getting the most out of your electric vehicle battery by ensuring it has a long life and little deterioration.

What Is the Function of Electric Batteries?

Batteries are energy storage devices that can hold a large quantity of energy. Car batteries efficiently arrange and store energy, then distribute it to an electric motor and accessories like air conditioning and high-zoot music systems.

Few technologies progress as quickly as batteries. That’s why today’s electric cars almost all have a range of more than 200 miles on a single charge, whereas batteries a decade ago could only go 75 miles or so.

EV batteries do not require any maintenance in the traditional sense. The battery stowed behind the passenger compartment or beneath the back seat will never come into touch with an electric car driver.

EVs have lower operating expenses than equivalent gas-powered vehicles. If you’re doing any math, it’s worth putting that into the cost of an EV. A 2022 Nissan Leaf, for example, costs approximately half as much as a comparably equipped Nissan Versa, but Leaf owners never need an oil change or a tune-up because there’s no oil to change and nothing to tune-up.

Note that electric automobiles rely on coasting to recharge their batteries, which reduces brake component wear.

How to Care for an Electric Vehicle Battery?

You generally don’t need to change your lifestyle to keep your electric vehicle’s battery in excellent repair, but there are a few things you should be aware of.

To begin with, it may be tempting to leave the house every morning with a large “100%” indicator on the dashboard. Don’t do this unless you’re certain you’ll be extending the battery’s range. It’s preferable to keep the battery charged to around 80%. The battery gets taxed when the last 20% of the charge is added, hence charging follows a non-linear curve.

The good news is that newer EVs allow you to manually set a charging maximum to help extend the life of your battery. With a range of 300 miles, you’ll still have 240 miles between charges. You’re unlikely to put many miles on the odometer in a day, let alone a week.

You’ll never want your electric vehicle to run out of charge. Unlike a gas or diesel vehicle, this necessitates the need for a tow truck to transport it home. Most models now have a “limp” mode that allows for extremely low speeds to allow the EV to get off the road before it entirely dies.

You should also keep your use of Level 3 chargers to a minimum. If it sounds contradictory, think of Level 3 chargers as jumping on a treadmill and immediately selecting the fastest speed. If you don’t fall off, you’ll be exhausted after a few minutes at the very least. The best course of action is to charge the battery as little as possible.

Consider how you’ll store the vehicle as well. EVs should be kept in warm temperatures rather than being exposed to excessive heat or cold for long periods. That doesn’t rule out the possibility of an EV in Tucson or Fairbanks, but it will result in slightly faster battery depletion.

What Is Battery Degradation in a Car?

You’ve probably noticed it with your smartphone or laptop as it gets older: the more charges and discharges you do, the shorter the battery life becomes. Cells burn down with time, resulting in a battery with decreasing capacity and driving range.
Recent battery developments have started to lessen the risk of degradation. Today’s batteries are of the highest quality in history, as evidenced by long warranties.

Battery life is an important consideration when purchasing an electric vehicle, but it’s difficult to anticipate how long one will last. Early electric vehicles, such as the 2011 Nissan Leaf, have either had their battery packs replaced or are on the verge of doing so.

How long your electric vehicle’s battery lasts is determined by how you use it. Following the tips above for different forms of charging and vehicle storage can help a battery last much longer.

Are EV Batteries Covered by a Warranty?

In contrast to the traditional “bumper-to-bumper” coverage supplied on a new car, batteries are covered by a separate warranty.

The extent of coverage varies by the carmaker, vehicle model, and model year. The majority last between eight and ten years, or between 80,000 and 150,000 kilometers, whichever comes first, with some lasting up to ten years. Hyundai’s warranty was remarkable in that it gave lifetime coverage for the original owner — regardless of miles — for a few model years. A dealer can also tell you when the battery warranty coverage on a new or used model will expire.

Each warranty also has its definition of “battery failure” as determined by the automaker. In most cases, batteries must degrade past a certain point before an automaker will consider a complete replacement.

How much does It Cost to Replace an Electric Vehicle Battery?

It’s not for the faint of heart to replace a battery. The installation of a new or refurbished battery is a difficult task that should never be attempted at home. Replacement necessitates tampering with a high-voltage electrical system that is interconnected with a plethora of computer systems and sensors. Furthermore, battery packs are bulky and difficult to use.

A remanufactured battery pack for an early Nissan Leaf can cost as little as $2,000 or as much as $10,000 for a higher-capacity unit in a more modern model.

How to Extend the Life of an Electric Vehicle’s Battery?

EV batteries go through a ‘discharge’ cycle when driving and a ‘charge’ cycle when the car is plugged in. The quantity of charge the battery can hold is affected by repeating this process over time. This reduces the range and time required to charge between trips. The majority of battery manufacturers offer a five- to eight-year warranty.

An electric car battery, on the other hand, is expected to last between 10 and 20 years before needing to be changed. When driving, EV batteries go through a ‘discharge’ cycle, and when the car is plugged in, they go through a ‘charge’ cycle. Repeating this process over time affects the amount of charge the battery can hold.

This reduces the range of the vehicle and the amount of time it takes to charge between trips. The majority of battery manufacturers give their battery packs a five- to eight-year warranty. A battery in an electric automobile, on the other hand, is predicted to last 10 to 20 years before needing to be replaced.

To begin with, several manufacturers promise that their batteries will retain at least 70% of their capacity after 8 years. At 8 years old, a Hyundai Kona with a 450-500km range around town amounts to a minimum range of 315-350km.

For many, if not the majority of individuals, this implies charging twice a week rather than once a week.

You don’t have to be concerned about changing an electric vehicle battery because several manufacturers offer warranties of up to 8 years or 100,000 miles. This means that even if you needed to replace it in the terrible case that something went wrong, it might be covered under this warranty. Always investigate the type of warranty supplied by the electric car manufacturer you’ve chosen.

According to some estimates, prices will fall below $100 per kWh by 2030, around the same time as the government aims for electric vehicles to account for half of all new vehicles sold in the UK.