How cleaner are battery-electric cars than gasoline-powered cars? Electric Cars Vs Gasoline Cars | to find out the Union of Concerned Scientists studied the total global warming emissions of each vehicle throughout every stage of its life from manufacturing, driving to disposal.

This manufacturing and assembling phase for a gasoline car generates about seven tonnes of emissions. Battery-electric cars, meanwhile, are powered by a large rechargeable battery, which requires more energy and material to produce a battery-electric car with a range of 84 miles, emitting almost eight tons in its entirety.

Gas-powered cars create pollution with each gallon of gas, which burns away with emissions coming from gas extracting, refining, and transporting fuel. EVs, on the other hand, run on electricity that can be much cleaner than gasoline, it depends on how electricity is produced.

By the end of their lives, global warming would increase emissions by 57 tonnes, compared to 28 tonnes for average gas car battery emissions. Recycling and Disposing of a car, each car has less than a tonne of emissions, and remember that electric car batteries can be recycled or reused.

A medium-sized family car creates 24 tons of CO2 during its life cycle, while an electric vehicle (EV) produces about 18 tons over its life.

In the final tally, a battery with an 84-mile range cuts global warming emissions by more than 50 percent compared to building a similar-sized gas-powered car for battery manufacturing emissions within a year of driving an electric car. The country adds more and more renewable sources of electric driving electric will become even better.

The most popular renewable energy sources are: 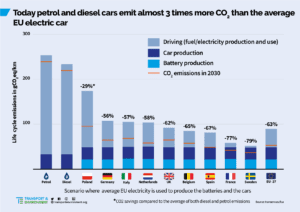 Therefore, the boom of EVs has just begun, electric cars are clean and are becoming environmentally friendly. Electric cars are the future of the Automobile industry. by a report In 2050, every second car on the streets could be electric, globally. Go Green Go Electric